SNSD on the front cover: 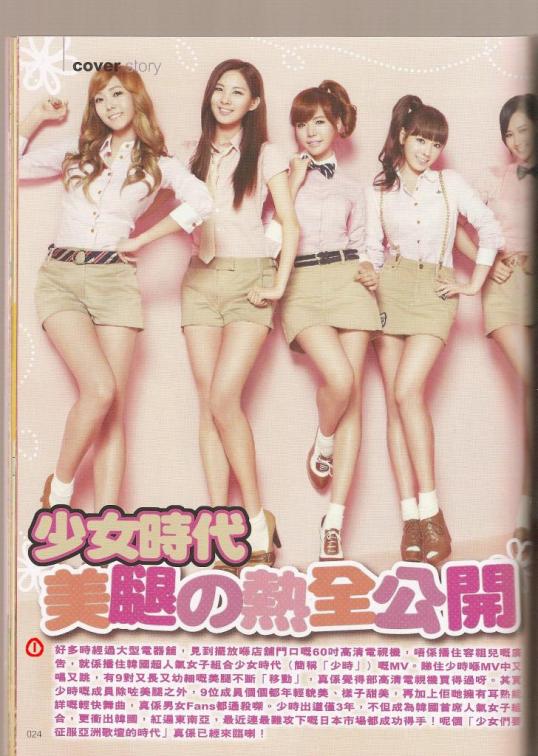 1 Intro
Many times when you walk across big electronic shops, you’ll see 60 inch HD televisions playing; it is either Joey Yung’s (Hong Kong singer) commercials or the super popular Korean girl group SNSD’s MVs. Seeing SNSD dancing and singing in their MVs, with their nine pairs of beautiful legs non-stop moving, it makes you think that the television is worth buying. Other than just beautiful legs, SNSD ‘s nine members are all young, pretty looking, and with their catchy songs, guy and girl fans are all falling for them. SNSD has debuted for three years, other than being Korea’s number one girl group, they have also been popular all over South-East Asia and has recently been successful even in the Japanese market

2 Training for a Long Time Before Debuting
SNSD’s members include: Taeyeon, Jessica, Sunny, Tiffany, Hyoyeon, Yuri, Sooyoung, Yoona and Seohyun. These nine that always show off their beautiful long legs have an average age of 20.4 years old. Being so young and dominating all over Asia, they should really be researched (looked up on internet). To fully understand them, we need to start from their music, television, image etc different perspectives. Let’s talk about music first. SNSD was created by Korea’s largest entertainment company SM Entertainment. Since ten years ago SM has been choosing candidates to become members of SNSD through competitions and different functions. For example Jessica, Hyoyeon, and Sooyoung entered SM very early to become trainees and finally officially debuted in 2007.

3 Very Good Results on their First Disc
When SNSD first debuted in Korea, a member of the group was revealed to the public everyday and it created a lot of news and attention for the group. Ever since, SNSD’s album sales in Korea have never been less than 100,000 copies. For example <Girls’ Generation> sold over 100,000 copies and afterwards with their popular song Gee, they released their first full album which sold over 150,000 copies. Earlier this year the release of <Oh!> had preorders of over 150,000 copies. If including the repackaged album, the count will be over 200,000 copies. Just with these numbers compared to Hong Kong singers who only sell around 10,000 copies of their discs, there really is a big difference. (Translator’s note: Hong Kong’s music industry has been dying for the past 5 years due to too much people illegally downloading music off the internet causing a significant drop in album sales. Please support the girls by purchasing their music legally.) 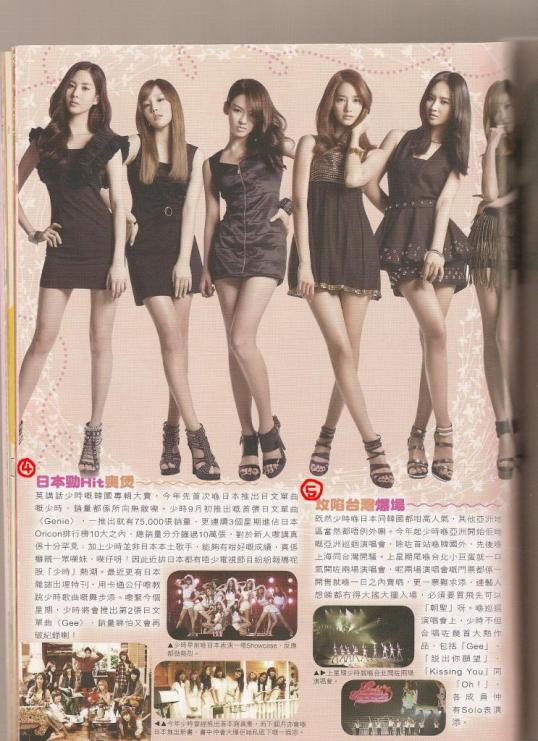 4 Japan’s Popularity
This year for the first time SNSD has released a single in Japanese. In September SNSD revealed their first Japanese song <Genie> and 75,000 copies were sold immediately. For 3 weeks, Genie was also able to clinch a spot in the top 10 on the Japanese Oricon charts. In total there could easily been 100,000 copies sold. For a new group debuting in Japan, this is incredible result especially when SNSD aren’t native Japanese singers. Because of that, many television shows have been reporting on the SNSD craze. Recently in Japan, a magazine taught readers how to dance to SNSD’s songs using cartoon images. This week SNSD will be releasing their second Japanese single <Gee> and sales will for sure break more records!

5 Charging into Taiwan with Success
Even though SNSD is very popular in Japan and Korea, they are also popular in other parts of Asia. This year SNSD has been starting their Asia Concert and the first stop was Korea. Other places included Shanghai and Taiwan. Last weekend SNSD performed two shows in Taiwan with both shows’ tickets being sold out within one day. Even Taiwanese artists that wanted to watch were unable to go in with special privileges. During the concert SNSD didn’t just sing their group songs such as Gee, Genie, Kissing You and Oh! but members also did solo performances as well. 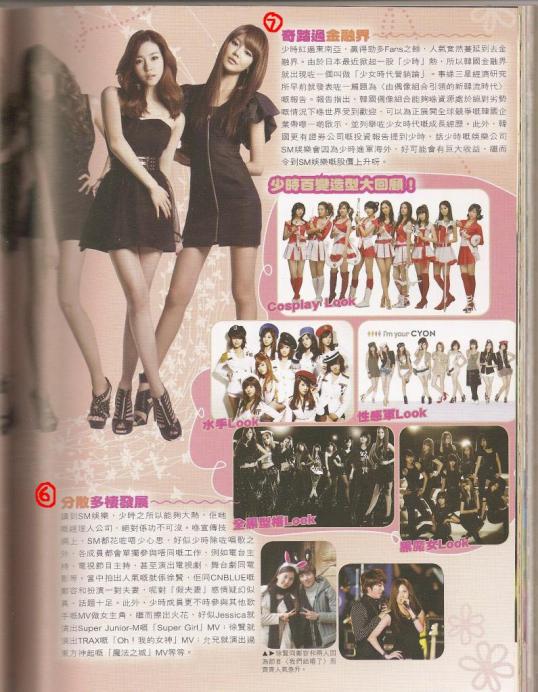 6 Approaching Different Routes
Some credit of SNSD’s popularity will have to be given to SM. SM spent a lot of time on promoting them. Other than just group activities, members have individual schedules as well – appearing as radio DJs, television MCs, appearing in dramas, and acting in musical as well as movies etc. Talking about attention, Seohyun and CNBLUE’s Yonghwa has been acting as a couple in We Got Married. Even though it is a fake marriage they seem to be like a real couple now. SNSD members often appear in other singer’s MVs. For example Jessica appeared in Super Junior-M’s Super GirlMV, Yoona appeared in DBSK’s Magic Castle MV etc.

7 Linking with the Financial World
SNSD’s popularity all over South East Asia has attracted many fans but they also have popularity in the business/financial world. An earlier article about “Korea’s idol groups leading a new trend of Korean wave” mentioned that Korean idol groups are able to leave a good impression and be welcomed by the global community. A financial company also mentioned that SM will have huge profits that lead to the rising of SM’s stocks because of SNSD promoting in the overseas markets. 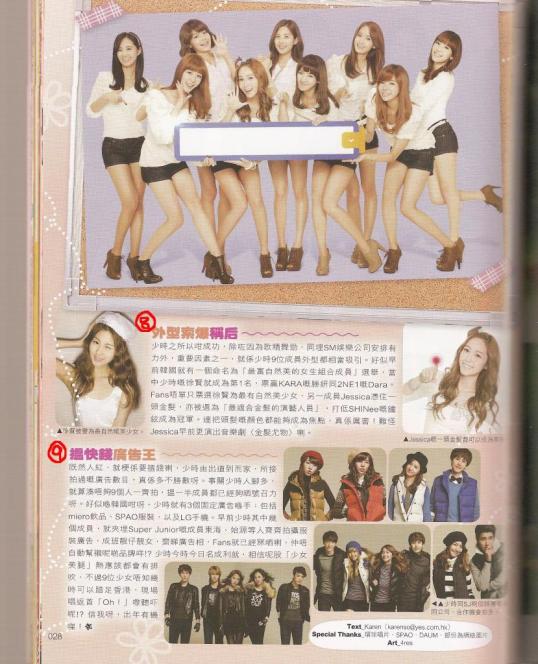 8 Attractive Concepts
The reason why SNSD is so successful is not just because of their catchy songs and dances but their concepts are also very attractive. Earlier this year there was a poll in Korea for ‘the girl with the most natural beauty’ was won by Seohyun. Following Seohyun was Kara’s Seung-Yeon and 2NE1’s Dara. Other than Seohyun being voted as number one for the girl with the most natural beauty, fans also voted Jessica as the ‘artist most suitable for blonde hair’, beating SHINee’s Jonghyun for the number one position. No wonder Jessica earlier appeared in the musical Legally Blonde.

9 Earning Quick Money – Queen of CFs
Because of their popularity SNSD has been able to film many CF’s since their debut. In Korea, they have three secured CF’s: including the food and drinks company miero, clothing brand SPAO, and the LG cell phone. Earlier a few members of SNSD along with a few Super Junior members went to a photoshoot for a clothing CF. With the photos having handsome guys and beautiful girls, fans are mesmerized automatically to buy their endorsed clothing. SNSD’s popularity will exist for a long time but when will SNSD come to Hong Kong?

4 responses to “SNSD on Yes!! Magazine – Revealing The Trend of Beautiful Legs”