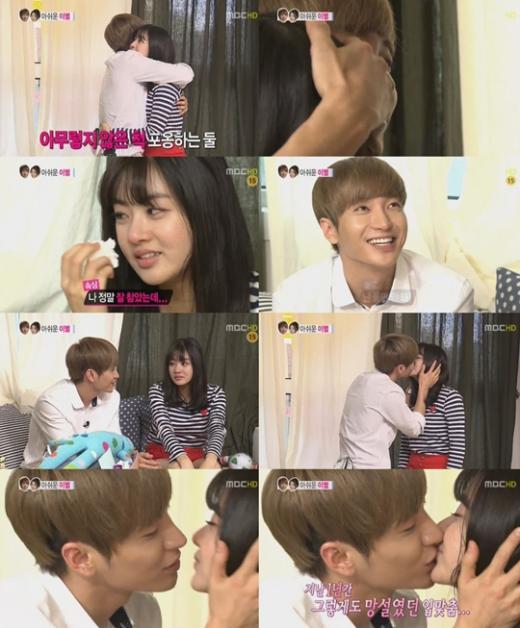 Super Junior’s Leeteuk and Kang So Ra completed their imaginary marriage by sharing a last kiss.

Leeteuk and Kang appeared in the September 8 episode of MBC’s We Got Married for the last time. It has been ten months since their first appearance on the show last October.

The couple spent their last episode together in their house. While they were looking at their pictures, their wedding album arrived and made them feel sad. They shared their memories through the pictures and stuff that they bought together to make their house pretty.

Leeteuk gave Kang a hug for the last time and Kang started crying. Kang wiped her tears and said that she tried not to cry. Leeteuk said it’s okay and gave her a hug and kiss, which is something he had been hesitant to do before.

Leeteuk didn’t shed tears when he was with Kang but he couldn’t help crying when he gave a post interview for the show. Leeteuk said, “I thought I was the only one who was shooting the show with my whole heart. Kang was too but I didn’t know. I was selfish.”

MBLAQ’s Lee Jun and Oh Yeon Seo will replace Leeteuk and Kang. Julien Kang and Yoon Se Ah couple, and ZE:A’s Kwang Hee and Secret’s Han Sun Hwa couple, also appear on the show. The three couples will live in a We Got Married village as a new format for the new season.