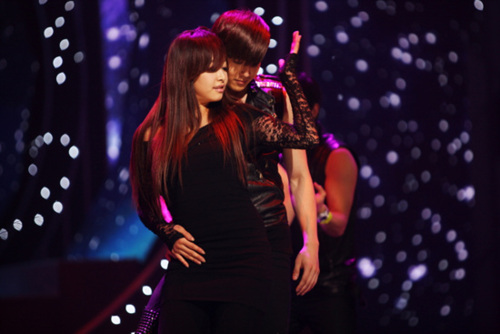 Make-believe couple Khun and Vic spent Christmas together for the first time after their marriage.

In the coming WGM season 2 ep, which will be aired on Jan 1st, Khun would send CD recorded with songs he sang for her and another gift to Vic.

That day, with the help of 2pm member, Khun prepared a ‘blockbuster-level’ event for Vic and expected highly to see her get touched and cry. But he felt disappointed after receiving little response from Vic.

Vic was very satisfied with the gifts, and she expressed how touched she was by giving him a surprise ‘gift’ of her own in return, making Khun felt really happy.

And in the blackroom interview, Khun confessed that he really like Vic more and more, making people doubt that if they are dating in real.

6 responses to “Victoria get touched from small gift, Khun’s confession about liking Victoria even more”

Check the requirements and how to apply here
Join 29,878 other followers